The Magic Carpathians Project has been active since 1998, established by Anna Nacher and Marek Styczyński (who previously had been a leader Theatre of Sound ATMAN). Influenced by musical traditions of Eastern and Central Europe (most notably the multicultural region of Carpathians mountains, spanning through Romania, Hungary, Ukraine, Poland and Slovakia), free jazz, the philosophy of sound of classical Indian music and contemporary classic the duo creates compositions based on improvisation using plethora of traditional instruments from Asia, Europa and Australia. Prepared electric guitar, home-made analog electronics, field recordings made during their numerous travels around the world and bastardised radio waves add up to the distinct atmosphere of their music. Anna Nacher is also praised for her vocal technique – she has mastered various types of traditional styles of singing known as throat singing, developped through Central Asia and Eastern Europe. She regularly run voice trainings through a series of workshops (Poland, Greece, Germany, Slovenia).

The Magic Carpathians Project has released highly acclaimed albums on Obuh Records, Drunken Fish Records, Vivo Records, Requiem Records, Reverb Worship as well as on their self-managed label, World Flag Records. They are  present on many compilations released in the UK (compilation “New Music from Central and eastern Europe” released by The Wire), Sweden, the U.S, Italy, toured USA in 2001 and 2006 (playing at many clubs: from Knitting Factory, NYC through SXSW, Austin to Bottom of the Hill, SF as well as performing at legendary Terrastock Festival in 2006) and Europe (Germany, France, Belgium, Netherlands, Switzerland, Sweden, Italy, Central Europe). The cooperations include the split CD with the American group Cerberus Shoal released on Northeast Indie and recent album with guest appearance of Eric Arn (of Crystallized Movements and Primordial Undermind).

[Biotop] This is possibly the greatest music I’ve ever heard from Poland barring Chopin. It’s an album you absolutely need to hear. If it wasn’t so enrapturing I’d say it’s a masterpiece of relaxing background music but, it transcends both the background and the foreground as an all encapsulating listen. I can almost imagine running through the woods to this track delirious and blissed out with feathers in my hair and paint dripping down my face. Lost in a wilderness of euphoria chanting and throat singing in tribal sublimity. Chad Murray, Echoes and Dust, January 2016

[Acousmatic Psychogeography] For this album the Magic Carpathians have played many roles: field guides, sonic scouts, and acoustic archaeologists investigating the musical heritage of the land they call their home. They have been applying the varnish to some improvised sessions recorded over a nearly sleepless two day period high up in a mountain lodge back in 2008. The results are like the whorls in a piece of wood picked up off the forest floor: fractal like, mesmerizing and endlessly intricate. Justin Patrick, Brainwashed.com

After listening to this album, I can’t help but be impressed by the Magic Carpathians’ take on experimental music. They manage to explore a variety of sounds and moods in some unconventional and interesting ways. Still, the most exciting aspect of “Sambucus & Ginko” is the level of intricacy that the Magic Carpathians bring to their improvised live performance. Every element seems very well placed and every track enhances the overall experience and atmosphere. Really, any live performance that sounds like it could have come from months of work in a studio (as this does) is a winner in my book. I certainly recommend tracking this one down.         8/10 — Matt Blackall (17 December, 2008), Foxy Digitalis

Been a while since we heard so much as a heavily-reverbed didgeridoo from this Euro ethnic trance/deep ecology tribe with roots in the late, great Atman cult. Now renamed The Magic Carpathians & Lechistan’s Electric Chair for reasons that are undoubtedly significant, the group is still made-up of Anna Nacher (on guitar, field recordings, banjo, loops, gamelan and angklung) and Marek Styczynski (on Badoog generators, field recordings, gamelan and loops) but the sound has moved on from the minimal bass/vocal rituals of the last few recs and more fully embraced psychedelic rock, albeit formally-unanchored and sunk deep in barely-recognisable drone/sound environments. Recorded in the wake of their appearance at Terrastock 6, this is one of the best releases to date from a duo that always seemed pretty great and just… well… real easy to like.
volcanic tongue, 2006

Nacher’s vocals run from the haunting to the frantic, and her barely hinged emoting helps her transcend the improv drones and rhythmic textures to help the five tracks here rise to the prophetic. Nacher’s guitar work is mezmerizing, as is Stycznski’s loops, field recordings and other sound generators. “Lechistan’s Electric Chair” is a 17 minute tour-de-force, covering a lot of territory, from ethnic folk and jazz to noise. Eastern and Central Europe has a history of great tragedy as well as a well-developed sense of dark absurd humor in order to cope and ennoble that tragedy, and it informs the mystical aspect of this record.The other epic, “Radio Lechistan,” clocks in at over fifteen minutes and creates its own world, in sound and voice, like a legend from the Balkans come alive in the present. Shorter but no less hypnotic are “Music Store,” ”Larry’s Place” and “ Conversations at the Edge of the World.” Each sound ancient and post-modern at once, and that is the Carpathians strength: the ability to make magic from both fleeting and eternal sounds and stories, and to weave from them a majestic yawp. 10/10 — Mike Wood (18 December, 2006), Foxy Digitalis

Following a trio of ‘Ethnocore’ releases, the duo’s eleventh album launches their new ‘Ethnoise’ series and, with titles like ‘The Prison of Your Mind’ and ‘Asylum on the Moon’ can be approached as a concept album about coming to terms with loss, loneliness, and insanity in an increasingly evil universe.    Nacher (w)raps her wordless scat vocals around the “second take” of opener, ‘The Place I Come’ while she and Marka demonstrate their dexterity on a range of multi-ethnic and homemade instruments ranging from her tampura, sruti box, “waves & tronics” to his didjeridu, Finn pipes and ocean drums, not to mention the proverbial field recordings, sonic suicide, fuck-ups, toys, found objects and magic tree rattles that appear throughout the recordings. Nacher slowly orients the listener to its decidedly eastern European surroundings, which are as bleak as the barren trees and snow-covered landscape of the cover photo of Anna, closed-eyed and trapped (or protected?) by a Queen’s death mask(?). It’s cold, aloof, yet fascinatingly intriguing, and sucks us into the vortex of ‘The Prison of Your Mind,’ a cacophony of distorted guitars, waves, electronics and loops that demonstrates through its seven frightening minutes trapped inside a spaghettied traffic jam of fried synapses, rubber rooms of discarded grey matter, and frantic mental detours down one-way dead ends desperately seeking that elusive escape hatch that a mind is, indeed, a terrible thing to taste.  Jeff Penczak, Terrascope.co.uk, 2005

“Sonic Suicide” is the latest CD from Poland’s ethnic drone trippers, The Magic Carpathians. I’ve never been disappointed by what Anna Nacher and Marek Styczynski do. Each of their albums, dating back to when they went by the name Atman in the mid 90s up till now, has been marked by some kind of unique identifying mark or theme. “Sonic Suicide” is imbued with the spiritual world angst of the last two years. The industrial sound-scape of “The Prison of Your Mind,” a propulsive loop of mechanized rhythms and angular guitars, is a scorching electro/ krautrock evocation. “2003” has somber guitar cycling beneath Anna’s irate, unorthodox vocal, bringing to mind Renate Knaup and Diamanda Galas. “Carpathian Herbs” and the title track explore more extended trance space that falls somewhere between early Amon Düül II and Hell on earth. And closer “Om Ah Sarasvati Namaha (Cosmic Version)” combines ethnic instrumentation, hypnotic chants and Hendrexian guitar sonics into a transcendent meltdown. That seems to sum up this record; it’s another chance to rise above the muck through lysergic sound tunnels rendered in headphones-ready stereo splendor. Lee Jackson, Foxy Digitalis, 2005

For the last five years, The Magic Carpathians Project have released a handful of superlative but criminally ignored albums of ethno-psychedelia. (…) Their sublime Ethnocore trilogy impressed me with its haunting melodies and deep psychedelic drones, based on cross-germinations of traditional folk of their native Poland together with indigenous music and instruments from around the globe. The Magic Carpathians utilize transcendental combinations of harmonium, hurdy-gurdy, accordion, guitar, violin, sitar and Carpathian woodwinds harmonized with more modern conceits such as vintage synthesizers, tape loops and field recordings. (…) The ghostly “Lavender, Satin & Gingerbread” features the fragile vocals of Anna Nacher, recalling Bjork’s intimate delivery on Vespertine. (…)With Euscorpius Carpathicus, The Magic Carpathians have expanded their already impressive musical scope even further, without losing that essential spark of creative intuition that consistently impregnates their music with its uniquely spectral beauty. Jonathan Dean, Brainwashed.com, Feb. 2004

What we get is possibly the most direct and straightforward Magic Carpathians album to date, but this doesn’t by any means suggest that it’s any less interesting. (…) The epic stunner “Fat Moon” is probably the ultimate example as it seems to be inspired by traditional American folk/country and as odd as it might seem it’s one of the most contemplative things I’ve heard all year. Mats Gustafsson, The Broken Face # 17, 2003

“Something You Can Hide In” leads off with a harmonium drone, and operatic vocals from guitarist Anna Nacher, suddenly giving way half through its’ 13-minute length, into what can only be described as a funky raga, at which point Nacher’s voice shoots into the stratosphere, as eerily witchy as the best of Gilli Smyth, less space-whisper than space-scream (like an only slightly subdued Diamanda Galas), and ends with pleasently melodic figures from guest violinist Patrycja Kujawska. Very spooky and ambient, probably appealing to fans of Current 93. Doug Pearson, Aural Innovations #23 (April 2003)

This third instalment in Polish group The Magic Carpathians’ Ethnocore series sees their sound stripped down even further to mostly acoustic fretless bass and vocals. The Resulting freed up space only serves to heighten the music’s ritualistic overtones, with vocalist Anne Nacher sounding particularly inspired. The Wire, Issue 222, August 2002

The Magic Carpathians use beside samples and other modern techniques also traditional instruments like guitars, piano, percussion etc. but also many folkloristic instruments and the soft voice of Anna. Classic, folklore and techniques goes perfect together and deliver original music that is this time not to heavy or bombastic. Tom Wilms, L’Entrepot (Belgium), January 2002 on „Dënega” CD.

Magic Carpathians are much closer to the ground than, say, Dead Can Dance. Bruce Miller, Magnet # 51, Sept.-Oct.2001

The second album from Poland’s Magic Carpathians Project is every bit as dazzling as their debut Ethnocore, even as they have since traded in that album’s electric space jamming for more primal earth rhytms and acoustic mantras. David Keenan, The Wire, March 2001

Atman’s swansong before resuming full-time work as The Magic Carpathians Project is a fantastic showcase for vocalist/conjouror Anna Nacher. As a cumbersome riffs seesaws back and forth beneath psych FX, Nacher screeches witch chants like Diamanda Galas before subsiding into delays and hymn calls. David Keenan, The Wire, October 1999

This site uses Akismet to reduce spam. Learn how your comment data is processed. 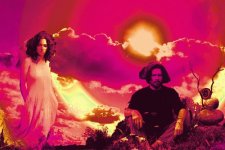 Our albums at Bandcamp

Magic Carpathians on the Web

Yet Another Magic Carpathians on Spotify

Noise to Silence on Soundcloud